Creating a Place Where Anything is Possible for Kids with Cancer

For 35 years Sally Hale has helped create fun times and fond memories for kids with cancer and their families.

When Camp Sunshine in Georgia became one of the first summer camps in the world specifically designed to serve kids and teenagers fighting the disease, Hale was the camp nurse. Today she oversees all of Camp Sunshine, which not only offers two weeks of camps but also provides year-round support for kids and their families both inside the hospital and out.

When Hale sat down with Crazy Good Turns for our profile of Camp Sunshine in S02 Episode 12, she told us about how she got her start at the camp, why its programming has evolved and expanded so far beyond its summer getaways, and how her organization helps those affected by cancer heal not just physically, but emotionally and spiritually.

Tell me about your upbringing, and how it led you to where you are today.

SALLY HALE: My family and my community was all about taking care of those around you. It was a community that, if somebody needed help, you pitched in and helped. You didn't expect any less. It was just ingrained into me: You develop a community of support around you, and you support and help others. I didn't really think of that as giving back. I didn't think of it as philanthropy.

Now that I look back, I realize that's the basis of a camp community—giving back, broadening your community and helping those in need.

And you went on to become a nurse. Can you tell me how that came about?

HALE: I was a nurse and started working in Atlanta right out of college, and went to graduate school. I was part of the pediatric oncology group at Emory and Egleston Hospital, which is now a part of Children's Healthcare of Atlanta, when Dorothy Jordan (Camp Sunshine's founder) approached me.

I did not know Dorothy, but she knew of me. And she approached me and said, 'I've got this idea to start a camp for children with cancer. What do you think about it?' 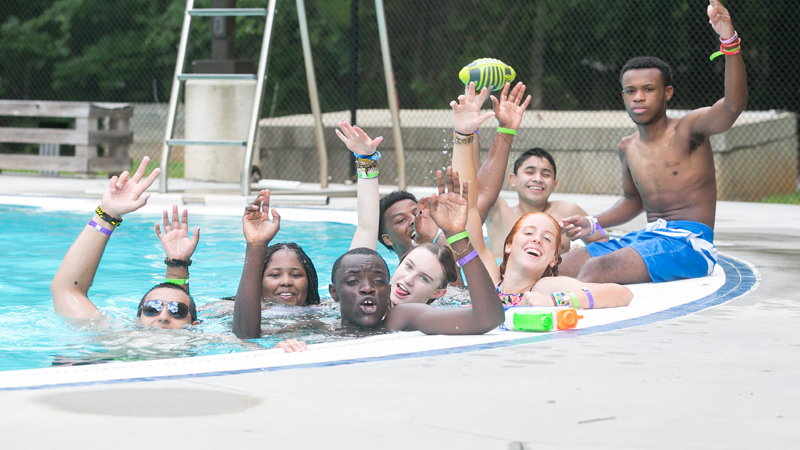 At that time there were only a handful of camps for children with cancer in the country. I knew of them because pediatric oncology is really a small community.

So you were a member of the founding team then, right?

We started planning it in 1982, and 1983 was our first camp. We had 38 kids that very first year and a handful of our own counselors, doctors, and nurses. We'd talked to other camps who had gotten started around the country but again there were only a handful. Dorothy spoke with them, she visited one of the camps up in Chicago, and we learned from them. They were very open to sharing what they knew, and what their experiences were. Together we took a leap of faith—and the parents certainly took a leap of faith in sending their kids that very first year.

Was it hard to convince parents to let their kids go for a week?

HALE: You know, now that I look back at it, I think it probably was hard for the parents to send their kids that first week. In fact, some parents said, "Not this first year. I might send them next year."

But they trusted us. They knew me. I took care of their children. They knew Dr. Ray Gab. That was a tremendous amount of faith and trust they put in us to send their child. And these were kids that couldn't go to other camps. So I think the parents learned that it was a gift to their child to be able to send them.

Where was camp back then?

HALE: Our first camp was on Lake Burton at High Harbour. It is now a YMCA camp. At that time, it was privately owned and we didn't know if we'd have enough money to pay the bill. I think it was something like $18,000, which is incredible now to think, but we didn't know. We just had supporters who were behind us. Dorothy really made sure that we had the money. 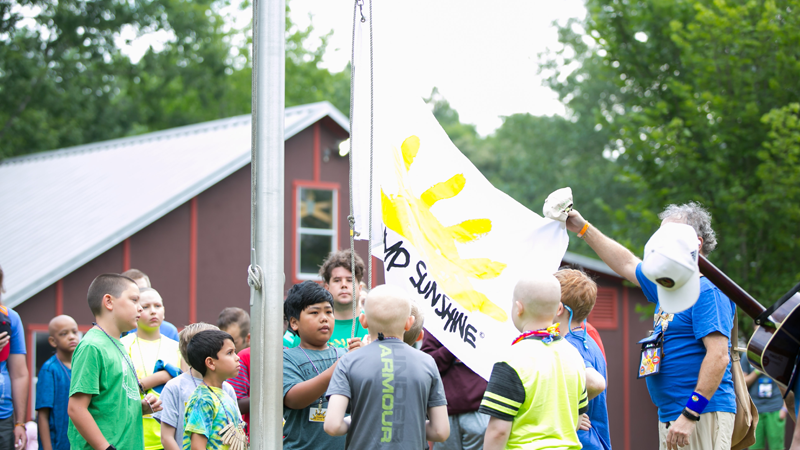 Today there are more than 120 camps for kids with cancer. What would you say differentiates Camp Sunshine?

HALE: Our program now is so much more than a summer camp. A lot of the camps that are in existence are strong, but they're one week in the summer. We're not only two weeks, but over 140 programs during the year. We run programs year-round. Nine weekends and two weeks out at Camp Twin Lakes.

We also have programs at Camp Sunshine House. We have programs around the state. We have groups. Next week, we're sending a group of teenagers out to Colorado for an adventure program with the Colorado Outward Bound School. So we're doing things year-round.

What kinds of programs are held at Camp Sunshine House?

HALE: We have support programs for families. We host nights where parents learn about sending their child away to camp at the first time. We have family nights for those who've lost their child to cancer, where they can come back into a community of people who understand.

We have lock-ins for teenagers and so they come on an evening, spend the night, stay up all night, and are together or dance, or a preschool program. Yoga classes for parents. We just do things all year-round. We're also in the hospital on a weekly basis and actually take camp to the hospital.

We call it "Sunshine To You." They get hats. They get T-shirts. They get to go in the playroom and play basketball or archery or do arts and crafts, or we'll bring a magic show. It gets the kids out of the hospital bed. It gets them out of their rooms and interacting with each other.

Kids with cancer just want to be kids. They have had so much taken away from them. But when you put them in that kind of environment, they just are kids. They want to play and communicate with each other and make friends. That's not only what "Sunshine To You" in the hospital does, but that's also the basis of all of our programs.

I understand there are also bereavement weekends. Can you describe how they came about?

HALE: Families that come to Camp Sunshine programs, especially our family camp weekends, are embraced by a community of support. And when they lose a child to cancer, not only have they lost that child, but so much of their support system. There are not a lot of people out there who understand that same kind of grief.

We had a parent come to us and say, 'You told us you're there for us throughout our cancer journey. We're still on that. We've lost a child and now we've lost our community and support. We need to be around other families who've experienced this.' So they really challenged us to look at that journey beyond cancer and help them.

So we started a bereavement program. We started a "Remember the Sunshine Family" weekend for families who've lost a child, and that's now extended to monthly support groups for those families.

And what year did that weekend start?

HALE: We've had 13 "Remember the Sunshine" weekends and we have served over 278 families in that program. The weekend is just like any other family camp weekend. The families come together. They each get their own cabin. We have activities where they can choose either to do an activity as a family or they might split up and somebody might go to archery and others are boating.

They don't have to apologize for wanting to talk about their child, their experience and their grief. But a lot of times, they're just having fun together as a family. 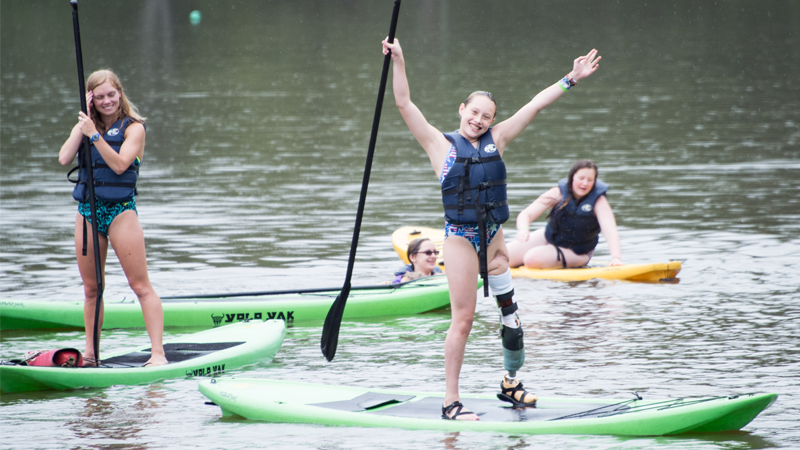 I have to say—and you can comment on this if you want—but we've done a lot of site visits, and the one to Camp Sunshine was one of the most fun and uplifting. Which was not at all what I expected. It was so full of joy.

HALE: A lot of people, when they come to visit Camp Sunshine, feel that it's going to be sad. But you have to remember that kids with cancer are kids. They desperately want to be children.

They're so different from adults, because adults who have cancer have the disease and their treatment on their minds. They're filled with worries.

Kids—when you remove them from that clinic space, that hospital space, the overprotectiveness of their parents—they just want to be kids. They want to go out and play and do what any other child would want. That's why it's filled with lots of joy and love. It's a place where anything's possible.

Where did the bracelets come from? When did that start, and how?

HALE: The bracelets started our very first year. It came from Camp One Step At A Time, which is the camp I mentioned in Chicago that Dorothy had visited when she was planning our very first camp, and they had friendship bracelets made out of those fishing swivels. We adopted that tradition from the camp in Chicago.

Every year, we put different colored beads on it. The first year, we had no beads, and then we started adding the beads. And you only get them when you come to summer camp, none of our other programs. They're very special. People will wear them for years and years. We've seen brides wrap them around their bouquets. Children want to wear them. They're very special. They'll keep them in a little memory box.

Do you have a story in your tenure there that really moved you?

HALE: There are a million. I will tell you a recent story that kind of astounded me.

While she wasn't able to get there last year, she was there this year, which was great. And she's doing really well. But when her father was telling me that story, he said it was in that moment that they realized that, while they were focusing on healing her body and curing the cancer, we were focused on healing her spirits and healing her emotionally. And that was every bit as important. So that really struck me. 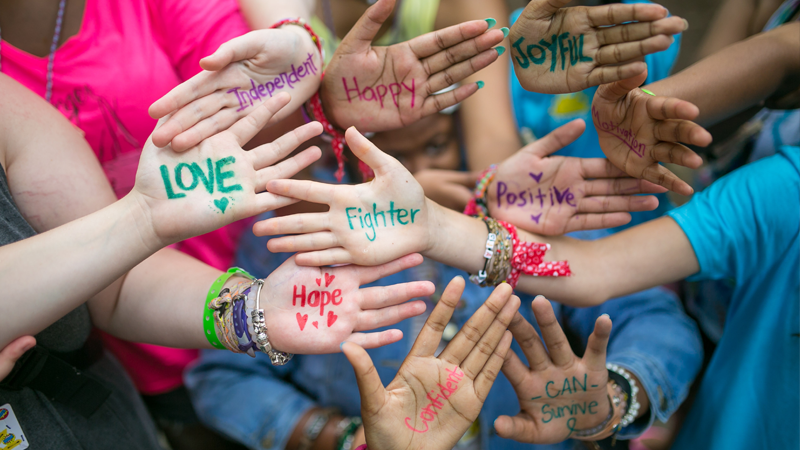 You have to deal with tragic personal loss. How do you cope with that?

HALE: It's really tough. We had a young man years ago who made it to camp in a helicopter for a visit, a two-hour visit from the hospital. We were able to get the Governor's helicopter. They flew him to come to camp and all these friends gathered around to welcome him and make sure that the two hours at camp that he got to see everybody. He flew back to the hospital and he died the next morning. But he was there.

The loss—not only for us as volunteers, but for all of his friends—was incredible. That's something that we had to experience collectively. That was in our early days, and what I realized is that the community rallies together and supports each other, and it was so important for those teenagers to be together. Yes, it is very, very sad. But you realize what a gift we've been able to give to that young man. And what a gift his parents gave to us to entrust us with the last few hours of his life. So we were able to do something that no one else could do for him at that point and stage.

Camp can add to that person's life and enrich it. And they teach us lessons that we never forget. We remember them forever.

Hear Sally Hale in our Episode on Camp Sunshine

Andrew Myerson and Julie Anne Kelly To Stand Up to Cancer, They’ll Get Punched in the Face